The targeted high-dose therapy effectively
treats stubborn plaques, even those that have not
responded to other treatments.

Are you looking for a better treatment for your Psoriasis?

The XTRAC excimer laser treatment system offers psoriasis sufferers many benefits. Depending on the extent and severity of your psoriasis, these can include:

Because of the increased power and speed of XTRAC Lasers, many physicians are now recommending laser therapy ahead of biologics and other systemic treatment options due to the unparalleled safety profile for laser treatments. Unlike biologic therapy for the treatment of psoriasis, there are NO significant negative systemic side effects associated with XTRAC Therapy. 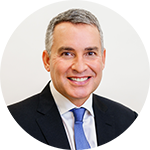 Who is a candidate for treatment?

The laser is ideal for treating mild to moderate psoriasis. Traditionally hard-to-treat areas such as knees, elbows, and scalp are easily treated, thanks to the laser’s aiming beam and adjustable spot size handpiece. The targeted high-dose therapy can effectively treat stubborn plaques, even those that have not responded to other treatments. 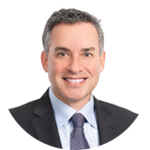 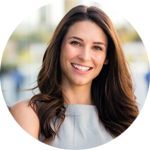 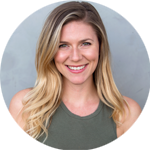 Stay Connected With Us

How does treatment compare with other psoriasis treatments?

Unlike topical creams and gels, treatment with the laser does not require any daily maintenance. Each patient is unique, but some patients enjoy several months of treatment-free remission after completing about 8 laser sessions.

Excimer laser treatments are painless and take only a few minutes. Equally important, some patients only need about 8 laser treatments, as opposed to 30 or more conventional booth sessions.

Due to the targeted nature of laser therapy, healthy skin is not exposed to the ultraviolet light, which may reduce the risk of premature skin aging that is often associated with lamp phototherapy. There is no thinning of the skin, easy bruising, or stretch marks often caused by steroids, nor any of the systemic side effects caused by some oral medications. Lasers have fewer shortcomings than most psoriasis treatments.

What can I expect during treatment?

Treatment will take place in your doctor’s office. First, your doctor will determine the best dosage level for you. Then, the doctor will place the handpiece directly on the psoriatic lesions and apply the laser therapy. You will hear a gentle hum and see a blue colored light from the handpiece tip. Most treatments take only a few minutes.

No. Most patients experience no pain or discomfort. A few patients may feel slight warmth shortly after treatment. This warmth is mild and short-lived. No anesthesia is needed.

Stay Connected With Us

How many treatment sessions will I need?

Your doctor will create a customized course of therapy for you based upon the extent, thickness, and location of the lesions. Some patients enjoy clearing after about 8 sessions.

How do I prepare for treatment?

No extensive preparation is required for laser therapy. Just ensure that the skin to be treated is clean, dry, and free of any make-up, lotion, or creams containing SPF protection.

Are there side effects?

Are laser treatments covered by insurance?

Many national, state, and local insurance companies cover the laser treatment, but coverage levels will vary by plan. 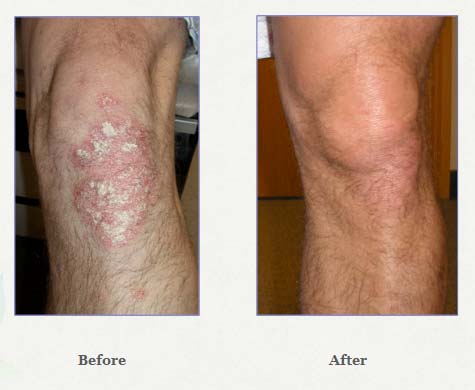 Are you looking for something better for your Vitiligo?

University Park Dermatology is proud to offer the XTRAC Laser!

The XTRAC laser can be extremely effective treatment modality for patients with vitiligo. Treatments are easily performed in the office, and are typically painless with no downtime. The treatments are usually covered by most national insurance carriers.

Patients with Vitiligo develop white spots on the skin that vary in size and location. The spots occur when pigment cells, or melanocytes, are destroyed and the pigment melanin can no longer be produced. Melanocytes normally occur throughout the skin, as well as in the hair follicles, mouth, and eyes. In Vitiligo, pigment cells can be lost in any of these areas. Common sites of pigment loss are:

Vitiligo affects between 0.5-1% of the population. About half of the people who develop this skin disorder experience some pigment loss before the age of 20, and about one third of all Vitiligo patients say that other family members also have this condition. Even though most people with Vitiligo are in good general health, they face a greater risk of having hyperthyroidism or hypothyroidism (increased or decreased thyroid function), pernicious anemia (vitamin B12 deficiency), Addison’s disease (decreased adrenal function), alopecia areata (round patches of hair loss), and/or uveitis (inflammation of the eyes). 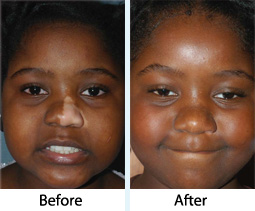 Melanin is the substance that normally determines the color of skin, hair, and eyes. This pigment is produced in cells called melanocytes. If melanocytes cannot form melanin or if their number decreases, skin color will become lighter or completely white as in Vitiligo.

Leukoderma is a general term that means white skin. Severe trauma, like a burn, can destroy pigment cells resulting in leukoderma. Vitiligo is just one of the forms of leukoderma.

What is the cause of Vitiligo?

The precise cause of Vitiligo is not known. A combination of genetic, immunologic and environmental factors is involved in most cases. This means that certain people are predisposed (have a greater tendency) to develop Vitiligo upon exposure to the
right trigger. Many people report pigment loss shortly after a severe sunburn, while others relate their onset of Vitiligo to emotional trauma associated with an accident, death in the family, or divorce.

How does Vitiligo develop?

The beginning of Vitiligo and the severity of pigment loss differs with each individual. Light skinned people usually notice the pigment loss during the summer as the contrast between depigmented skin and suntanned skin becomes distinct. People with dark skin may observe the onset of Vitiligo at any time. Individuals who have severe cases may lose pigment over their entire body surface. There is no way to predict how much pigment an individual will lose. Illness and stress can result in more pigment loss. The degree of pigment loss can also vary within each Vitiligo patch, and a border of abnormally dark skin may encircle a patch of depigmented skin. 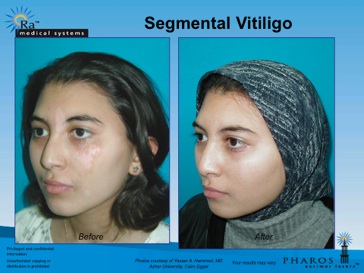 Vitiligo frequently begins with a rapid loss of pigment, which may be followed by a lengthy period when the skin color does not change. Later, pigment loss may resume, perhaps after the individual has suffered physical trauma or stress. The loss of color may continue until, for unknown reasons, the process stops. Cycles of pigment loss followed by periods of stability may continue indefinitely. Most patients who say that they no longer have Vitiligo may actually have become depigmented and are no longer bothered by contrasting skin color. While such patients appear to be “cured”, they really are not. People who have Vitiligo all over their bodies do not look like albinos because the color of their hair may not change (or it can be dyed) and eye color does not change.

Does Vitiligo have an emotional impact?